Jesse Zeman: If we don't act now, future generations will only see some wildlife species in museums 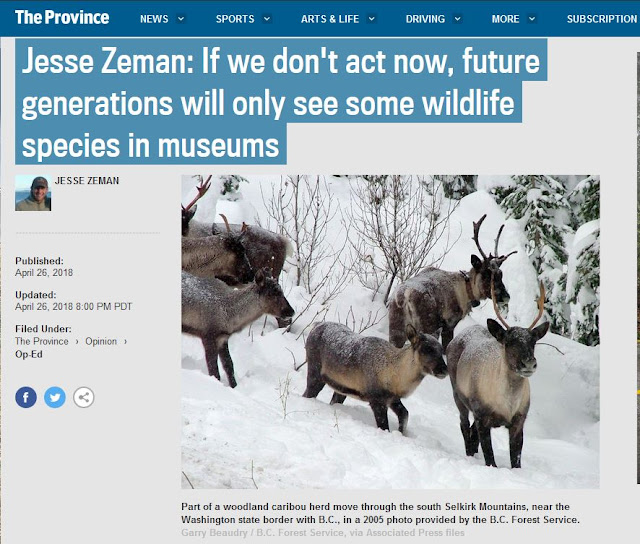 
News broke last week that B.C.’s south Selkirk caribou herd is now functionally extinct, and this week the South Purcell’s population is at a record-low four animals. While these numbers may shock the public, it was no surprise to those who have spent decades advocating for and researching mountain caribou.

B.C. started funding caribou conservation in the 1970s and researchers have been telling us how to fix the declines for over three decades. We failed to listen. Caribou are one of the most intensively studied animals in Canada; we may know more about them than any other wildlife species yet their populations continue to decline.

Why? Because B.C. did what’s easy, not what works.

Science tells us the ultimate cause of caribou population declines is habitat loss, principally logging and oil-and-gas development. These activities bring young forests while increasing the abundance of prey species such as moose and white-tailed deer, which attracts more predators. The activities also increase the number of roads, which brings people and allows predators to move more efficiently. Waiting for roads and cut blocks to grow in to get back to caribou friendly habitat takes decades.
In the interim, there are only a few necessary management options — managing human access, recreation, resource extraction, non-native prey and predator populations — to keep caribou populations viable while habitat recovers.

There are a few glimmers of hope in two B.C. mountain caribou populations, Klinse-za and North Columbia, where management options have been used and in North Columbia, where significant land-use planning occurred. For the most part, however, until the past few years, politicians only did what looked good, talked about recovery, had staff write recovery plans and implemented recommendations which were politically and socially convenient.
For the South Selkirk’s herd, it was too little, too late.

The story of caribou is becoming the story of wildlife. Moose populations are in decline across B.C., Rocky mountain bighorn sheep (one of two species on B.C.’s Coat of Arms) and elk are coming in at record lows in the Kootenays, Thompson and Chilcotin River steelhead are at record lows, and Fraser River salmon continue their downward spiral. While researchers tell us the over-arching issues are habitat related, the calls for change go un-answered, often in favour of the very things that scientists tell us will not change the trajectory of failing populations.

Last spring, the federal government cancelled the Rural Restoration Unit, a group focused on habitat restoration and enhancement in streams across B.C., the only part of Fisheries and Oceans Canada with a history of helping steelhead spawning and rearing habitat.

After a backlash, unit was restored with funding, no doubt, coming from other programs. Last fall, facing predicted record low returns, Freedom of Information documents show DFO pushing to move salmon net fisheries into higher risk period for steelhead, putting endangered runs at increased risk. Since, DFO has been busy justifying the sustainability of its salmon net fisheries, which “ensure less than 20 per cent of returning steelhead” are killed in nets — because, according to DFO, it’s OK to kill up to 20 per cent of endangered fish populations in net fisheries for salmon.

Last winter, the Committee on the Status of Endangered Wildlife in Canada — independent scientists the federal government relies on to assess wildlife — conducted an emergency assessment and designated these two steelhead populations as endangered.

Canada and B.C. are gaining a well-deserved reputation for placing band-aids on a patient that is suffering a heart attack. We are amassing an environmental debt that will be inherited by future generations whose expectations for vibrant wildlife populations will not be met. Under the current approach, seeing a Thompson River steelhead or a  mountain caribou will be left to electronic devices or museums.

B.C. is at a crossroads. We can continue to do what we always have and manage our fish and wildlife to zero and let politicians off the hook for failing to keep wildlife a priority or we can advocate for wildlife. At the B.C. Wildlife Federation, we care deeply about fish and wildlife and invite the public to join us and focus on their recovery.

Jesse Zeman is fish and wildlife restoration program director at the B.C. Wildlife Federation.
Letters to the editor should be sent to provletters@theprovince.com. The editorial pages editor is Gordon Clark, who can be reached at gclark@postmedia.com.
CLICK HERE to report a typo.
Is there more to this story? We’d like to hear from you about this or any other stories you think we should know about. Email vantips@postmedia.com.