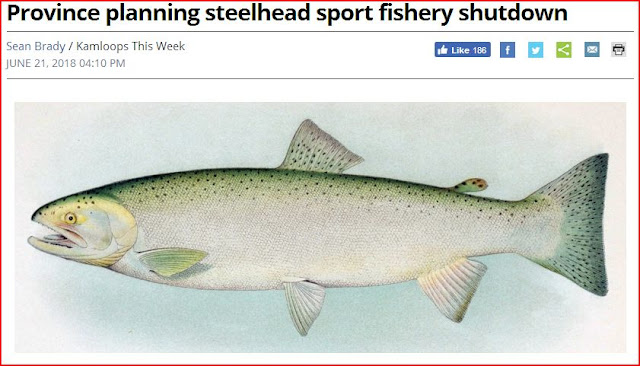 Posted by Alex Johnson at 22:42 No comments: 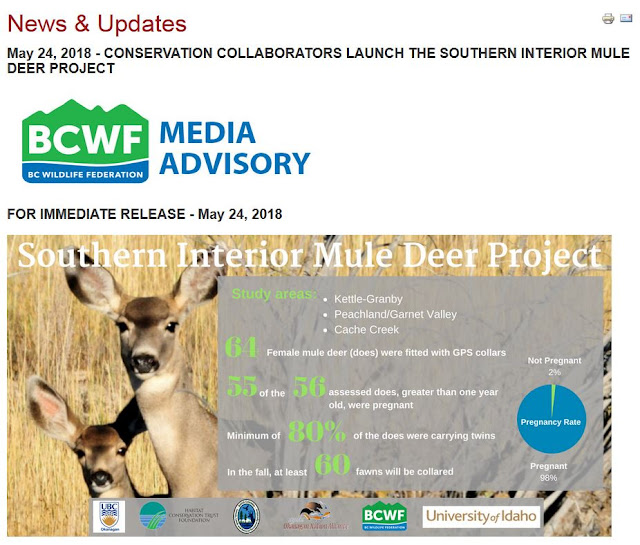 A new, large-scale research project, involving multiple agencies and universities, has started to tackle one of the most pressing needs in wildlife management in British Columbia – how to understand and reverse declines of mule deer in the Southern Interior. With contributions from Indigenous people, the public, stakeholders, and industry, this project brings together cutting-edge research on deer ecology with multiple partnerships to advance both evidence and cooperative-based approaches to wildlife conservation.

“Mule deer declines have been a concern in portions of the southern interior since the 1960s, and decades of hunting regulation change have not reversed the declines," said Jesse Zeman, Director of Fish and Wildlife Restoration, BC Wildlife Federation.

A combination of fire suppression, timber extraction, highways, urban sprawl and other factors affect the movement and size of mule deer populations in the Southern Interior of B.C. Sophie Gilbert, an Assistant Professor at the University of Idaho and co-investigator on the project, said, "in addition to landscape change, things like increases in competitor or predator species may also be affecting mule deer, as we've seen in other parts of western North America, and we want to identify which drivers are most important in the Southern Interior.

"Mule deer are essential for food security, Syilx (Okanagan) cultural practice and knowledge transfer, hunter opportunity, and are a ‘canary in the coal mine' for B.C.'s ecosystems.
“What we have heard from Indigenous communities, ecologists, and resident hunters is that the decline of mule deer matters to them and the status quo is no longer sufficient," said Dr. Adam T. Ford, Assistant Professor and Canada Research Chair in Wildlife Restoration Ecology at the University of British Columbia, Okanagan Campus and co-investigator on the project. "It is time we bring more science to bear on issues affecting wildlife in B.C."

The B.C. Fish and Wildlife Branch, in collaboration with the BC Wildlife Federation, Okanagan Nation Alliance, volunteers and researchers at the University of British Columbia, and the University of Idaho, placed GPS tracking collars on 64 adult female mule deer (does) in the following areas: Kettle-Granby, Peachland/Garnet Valley, and Cache Creek/Elephant Hill fire.

There are an additional 33 adult female mule deer collared in the Kootenay study area.
Of the 64 deer captured in 2018, ultrasounds were used to assess pregnancy rates and general health on 56 does greater than one year of age. The project team found a 98 percent pregnancy rate, at least 80 percent of those does were carrying twins. Does and their offspring (fawns) are what drive deer population change, which is why the project is focusing on them.

The GPS collars in the Kettle-Granby, Peachland/Garnet Valley, and Cache Creek study areas track the deer movements every 4.25 hours and provide information on the deers’ habitat use, how they move across the landscape, which areas they avoid, when and how they die. When a collar is no longer moving, a message gets sent to the project team which allows them to investigate factors contributing to the animal’s death.

In addition to the collars, at least 200 remote cameras will be deployed in the project areas to provide an understanding of how other animals (predators, prey, and people) interact with mule deer. The cameras will also provide recruitment data (fawn survival) and sex ratios (buck: doe), and potentially help count mule deer and other large mammals.

This fall the group expects to place GPS collars on a minimum of 60 mule deer fawns and will also incorporate vegetation monitoring (food availability). 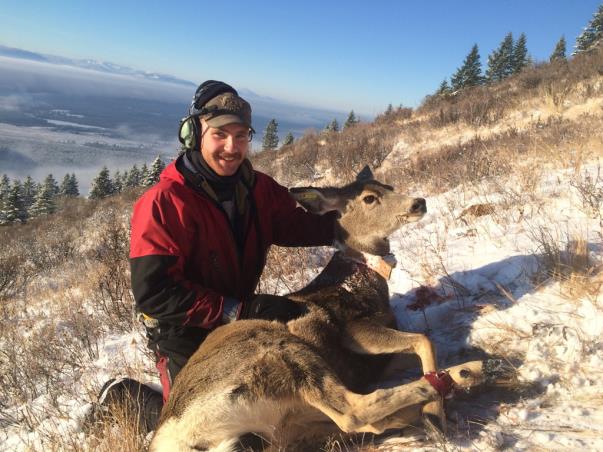 To date, nearly $300,000 in direct funding has been contributed to the project through multiple sources including, BC Wildlife Federation Clubs and partners, corporate donors, Habitat Conservation Trust Foundation, B.C. Fish and Wildlife Branch, Ministry of Transportation, and B.C. Timber Sales. The project has also confirmed over $500,000 of in-kind support from collaborators, particularly project volunteers and the University of B.C. Okanagan and University of Idaho.

"While there has been tremendous community support, the project still requires additional financial and in-kind support to fund the remaining four years of the project," said Jesse Zeman. “Please go to the BC Wildlife Federation website [bcwf.bc.ca] to make a donation and receive a tax credit receipt, get updates, or learn about volunteer opportunities for the project.” People can also donate directly to the Okanagan Nation Alliance [www.syilx.org].
Posted by Alex Johnson at 11:45 No comments: