One of the best things about being out in the woods is being unplugged.  The last time I went camping it took me several hours to slow down, relax, and adapt to being disconnected again.  It was fantastic once I could unwind.  However, being disconnected and out of cell phone range has its risks.

A few years ago, a tree fell and crushed by car, landing next to my tent while I slept inside, nearly killing me.  I was lucky enough to be in cell phone range and got help from my wife, father in law, and BCAA.  If that had happened way in the bush, or if my father in law had been chewed up by a grizzly back in 2015 during his encounter, being out of range of calling for help would have really increased the safety risk.

I decided to look into the various options for satellite communication for emergencies and checking in.  It was between the Spot and the Delorme inReach SE.  The Spot was $150 for the unit at the time and the InReach was $300.  I chose the InReach when I realized that with spot you have to sign up for a full year of coverage for $150 USD (Now its $175USD) vs. the inReach which you can activate one month at a time for about $25/month.  After one year, the inReach is cheaper than the Spot, and as a bonus, it has a lot more functionality.

One cool feature is the Garmin Earthmate app which allows you to connect to the inReach via Bluetooth with your phone.  Using the app or the inReach itself, you can send texts or preset messages.  You can also have it send tracking points automatically to any phone or email address. I set it to send my wife my location every few hours.  That way, in case something happens and I stop moving, or if I were unable to call for help myself, she would be able to notify rescuers of my location. 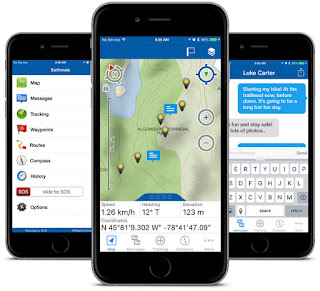 Overall, I have to say I love the app and the device. It works pretty well most of the time.  I have had two experiences were it didn't send a message for long periods of time.  Once I was at the Coquihalla summit and tried sending a message and it didn't send for a few hours until I was back near Chilliwack. The next time I tried it I was camping near Harrison lake and it took about 30 minutes before it sent, but then I could send and receive regularly.  I submitted tickets to their customer service, but nothing became of those.  Since then I have tried it several more times without incident, so that's more reassuring.

As a friend of mine at work said, this device can turn a life threatening situation into a good story at the bar.  It has a handy SOS button which you can arm with a switch and then send with the SOS button.  I hope to never need to use it, but having it around gives real peace of mind.

I see that it has some cool mapping and way-point features.  I'll see if I can get those working and post an update when I figure those out.

All in all I would give the Delorme inReach SE a 4 out of 5 because of the connection issues.