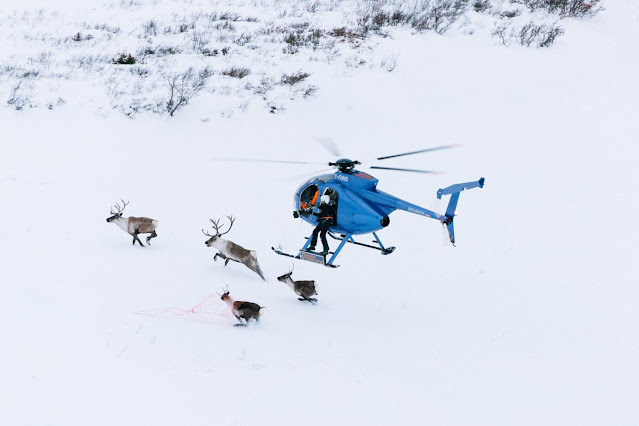 Vancouver Hunter: Great read. Happy to see collaborative management of Caribou between the Tahltan Nation and BC government biologists. We as hunters need to talk to our elected officials and ask them to find more funds for protecting habitat and wildlife.

The four-year-old caribou is still on her feet, kicking and bucking like a Stampede bronc, as Clements Brace and Conrad Thiessen scramble toward her through the late October snow.

There’s a thin white mist drifting over the ground from the rotor wash of the capture helicopter, but from the open door of a second chopper hovering a few hundred feet above, we have a clear view of the action. With her head and forelegs tangled in a bright orange net, the struggling caribou twists and stumbles as Thiessen, a wildlife biologist with the British Columbia government, quickly closes in. Brace, a camo-clad Indigenous guardian from the Tahltan Nation, runs a few steps behind.

They dodge sideways to avoid a lunge of the caribou’s antlers before swiftly stepping to her side, tackling her by the head and shoulders and muscling her to the ground. The two men have her controlled within seconds, and then we’re banking and dropping, the barren mountains tilting precipitously on the horizon as our pilot spirals down to land.

Read the rest of the story here:

Email ThisBlogThis!Share to TwitterShare to FacebookShare to Pinterest
Labels: BC Wildlife, Caribou, Conservation